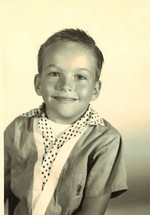 In addition to his parents, Bob is preceded in death by his daughter, Kelly Kennon; and brother, Jim Selby.

All funeral arrangements have been cared for by DeClue Funeral Home.