To share your memory on the wall of Lynn Marler, sign in using one of the following options:

Interment will follow the service, held at Big River Cemetery. All funeral arrangements have been cared for by DeClue Funeral Home.
Read Less

To send flowers to the family or plant a tree in memory of Lynn Gilbert Marler, please visit our Heartfelt Sympathies Store.

We encourage you to share your most beloved memories of Lynn here, so that the family and other loved ones can always see it. You can upload cherished photographs, or share your favorite stories, and can even comment on those shared by others.

Posted Jan 21, 2020 at 02:21pm
As a member of Fountain of Life Tabernacle in Jackson MO I wish to say "thank you" for the privilege of meeting our Pastor's Brother Lynn. Even though a couple of hours and quite a few miles separated us he still came to hear his brother preach from time to time. It was a joy to know him. May he rest in peace now free of pain or sickness of any kind. Sending prayers up for Pastor and all of his family.
Comment Share
Share via: 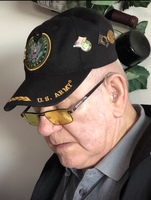